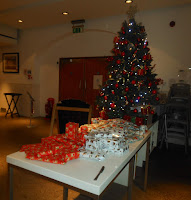 Another successful Christmas lunch! After a glass of sparkling wine, Friends sat down to an excellent three course lunch followed by tea and coffee and a mince pie for those who could make room for it!   As ever as ever, all received a raffle prize. This was an opportunity to meet old friends and to make new ones. Our thanks go to Brian and team in the restaurant and to Catherine and team in the shop.

There was a full house on 26th November to hear Margaret Anderson talk about the rich archaeological heritage of Orkney. This was her second lecture. The first, earlier this year, was on the Stone Age including Skara Brae and Maes Howe. This second lecture dealt with the Bronze Age, Iron Age and the years up to, and including, the coming of the Vikings. In two well illustrated lectures, she told us of the archaeology which is still being discovered today and which is changing our understanding of Orkney’s past. In thanking Margaret for her talk, Liz Dent also thanked her for the popular walks and talks and tours which she has given to the Friends and said that all had appreciated these.


Friends visited four sites in Hamilton on 2 October 2019. First stop was Chatelherault, a former hunting lodge of the 5th Duke of Hamilton. Then we went down to the Low Parks and the 10th Duke of Hamilton’s Mausoleum, inspired by the Pantheon in Rome, with a wonderful cupola. Lunch was taken in the Assembly Hall at the Hamilton Museum. The last stop of the day was Hamilton Old Parish Church built by William Adam in 1732.
An  enjoyable and excellent day thanks to capable and knowledgeable guides.

We Are Seventy Five!


On the 1st October Friends celebrated their 75th Birthday at a reception in Kelvingrove art Gallery and Museum hosted by the Lord Provost, Eva Bolander.
The company were addressed by the Lord Provost, by the Head of Museums, Duncan Dornan and by Liz Dent, Chair of   the Friends. Over birthday cake and drinks, we were serenaded by Jim Hunter on the organ playing his own composition   ”Friends of Glasgow Museums”.

The lecture on 24th September transported us to the National Gallery in Dublin. After ensuring that we appreciate the attractions of the city of Dublin, Dr Maureen Park introduced us to the permanent collections in the gallery. There are paintings by European masters, including Rembrandt, Caravaggio and Monet as well as paintings by Irish painters maybe less well known to us. She skilfully interwove stories about the paintings and linked them to paintings in our own collections. The lecture was much appreciated and we look forward to hearing her again.

Friends who travelled to Culross on 10 July were blessed with the weather. What we had expected to be a wet, dismal day, was in fact dry and warm. We were also fortunate In Our National Trust Tour Guides who walked us around Culross and into the Palace. What a wealth of information they gave us – relayed with humour! We learned so much about the origins of phrases and expressions which are in common use today.We had an excellent lunch and then time to wander in the afternoon.
Many thanks to Margaret and Joanne for their careful arrangements .

Friends enjoyed a tour of the current exhibition at GoMA, Domestic Bliss. Those who have read the article by curator Katie Bruce in the last Newsletter will have had a flavour of the exhibition, but we were fortunate to have Katie herself as our guide . Every object in this exhibition has its own story and Katie expanded on them all. This was a most interesting morning at an intriguing exhibition.
Posted by FoGM at 18:47


The past few weeks have been very busy for the finance part of the Committee. It was agreed at the AGM on 30 May 2018 that the subscriptions should all be increased by £5 for each category of membership. Also, it was decided that the subscriptions which are paid by Standing Order would be paid into the Milngavie Branch of the Clydesdale Bank. This has caused some confusion as a number of members are not aware that a standing order is a repeating payment set up by the member to pay to the Friends and therefore the onus is on the member to contact their Bank to change the amount and also the Bank to which the Standing Order should be paid. In this way it is totally different from a Direct Debit which is under the control of the organisation to which any money would be paid.

Most of the Grants which have been settled this year were grants which had been approved in previous years. A  Grant of £10,000 to help towards the purchase of X-ray equipment for the Conservation Department was approved in principle on 7 August but has not been requested by the end of this financial year. We have, however settled a number of grants granted in previous year as follows:

We are, as always very grateful, for our members’ continued support in order that we may continue to assist Glasgow Museums.

On the cool bright Spring morning of 17th April, a group of some 30 members of FoGM boarded a coach in central Glasgow for a day trip to New Lanark World Heritage Site.
We were transported to the centre of New Lanark where we were informed of the arrangements which had been made for the visit with the principal options of   taking part in either a guided tour of the complex that included time to visit the Scottish Diaspora Tapestry or spending most of the available time in the exhibition hall looking at the Tapestry.
Regardless of which option taken, we were able to admire the site and its facilities on the banks of the River Clyde. However, there was something special about the Tapestry with its 305 panels that told the tales to Scotland. This wording might seem at first reading to be unusual but this is not the case if one remembers that the panels describe and detail events associated with  individuals or groups of Scots who migrated with determination and courage far and wide  throughout the world in search of adventure and a new life. Displayed by continent, the panels were  easily viewed and adequately lit so  it was very easy to become absorbed in the artistry of their design, the skill of the embroiders and to access the associated  captions by means of  the  Scottish Diaspora Tapestry App. A great example of the juxtaposition of the old and the new!  Added bonuses   were the displays of embroidery 'postcards' by the Scottish branches of the Embroiderers Guild for   the participating countries in the 2012 London Olympic Games and a display by the Biggar and District Embroiders' Guild in celebration of its 40th year anniversary.
Perhaps not unexpectedly the day passed quickly and it was time to return before visiting and viewing had been completed. Many thanks to those who organised the outing and especially to Anne Robertson for her stories and attention to detail for a most memorable day.
Scottish Diaspora Tapestry.

This week, Friends were fortunate to have two talks about Leonardo da Vinci and his works.

The lecture given by Colin Bailey comprehensively covered Leonardo’s life from Vinci to Paris via Florence and Milan. He discussed Leonardo’s paintings and drawings and included the making of paper and the use of pen and ink, crayon and charcoal.

Then on Friday we had breakfast and a visit to the exhibition “Leonardo 500: A Life in Drawing  “in the Kelvingrove Art Gallery. Curator Pippa Stephenson introduced us to the 12 drawings on show and highlighted aspects of some of these which greatly increased our understanding.

More can be learnt about the exhibition in the article in the current newsletter written by Pippa. The exhibition is free and open until May 2019.

Email ThisBlogThis!Share to TwitterShare to FacebookShare to Pinterest
Labels: Past Events

Visit to the V and A , Dundee


Friends visited this interesting museum in February.   We had a comprehensive tour of the museum, a visit to the permanent Scottish Gallery and an excellent lunch. We were fortunate to see the fabulous exhibition: Ocean Liners:  Speed and Style.
Oh to have lived like that !


Following on from the lecture given by Emily  Malcolm in November last year, thirty friends visited GMRC  to see  the ship models. These are now housed in a purpose built pod, giving adequate space for display.
They come from the last two centuries, mainly from the heyday of ship building on the  Clyde. These are remarkably detailed and precise in their construction and have been made by craftsmen.. However, there are other vessels from foreign parts. Emily drew our attention to particular aspects of each model and gave us anecdotes about them.


We had not one but two tours because John Messner then took us on a tour of marine paintings from the collection. These gave us a picture of how the Clyde has changed in the past two centuries- from a small shallow river to the basin with many ship yards and through two world wars.
We are most grateful to John and Emily for a morning “on the water”.

Dippy, a replica of a diplodocus, has arrived in Kelvingrove. The skeleton of Dippy was dug up in Wyoming, USA in 1899. The original skeleton is in Andrew Carnegie’s Museum in Pittsburgh USA because the excavation was funded by Andrew Carnegie. In his honour, the dinosaur is named I diplodocuscarnegii. Dippy is 70 feet long and has 292 bones.
King Edward VII visited Carnegie at Skibo Castle and saw a drawing of the reconstructed skeleton. He asked Carnegie if he could make a cast for the British Museum. Carnegie obliged and donated a plaster cast which was unveiled in 1905. It has remained in the Natural History Museum since then. A decision was made to put another exhibit in the central hall of the museum and to send Dippy on a tour of the United Kingdom. Glasgow is its fourth stop. It has to travel with a team of dedicated technicians to ensure that it is properly installed. It will be here until May 2019.
Already there have been crowds of people eager to see him/her on the only visit to Scotland- 50,000 visitors in the first fortnight.

Thirty Friends attended the exhibition at GOMA , Jack Knox –Concrete Block on Thursday 10th January. Jack Knox ( 1936-2015) was one of the most significant and well-respected Scottish painters of the 20th Century. The exhibition focuses primarily on the years from 1967 to 1978 but there is a collection of slides of paintings covering all his active years.
More can be read in the article in the Autumn newsletter written by Will Cooper who curated the exhibition. Will has now left to return to London and we wish him well in his new venture.